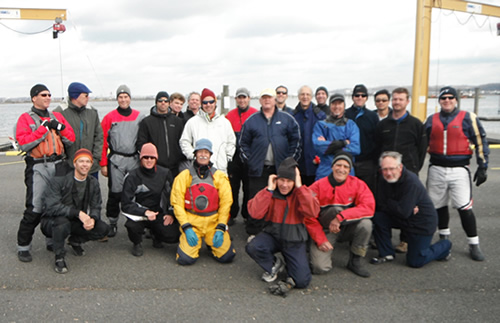 It was a beautiful day on the Potomac River with the wind from the northwest 7-15, which was more than the forecast that I saw. The sun was behind the clouds making it feel like a frostbite race but the wind was enough to keep you working. It was another great turnout with 23 boats making it on the last sailing day in 2011. Will Summers and Istvan Pely set up a windward leeward out in the river. The current was coming in/slack at the beginning of the day and was going out pretty aggressively by the last race keeping the fleet off the line.
Getting a good start was essential and the mark roundings were crowded which put an emphasis on making the right decision in a short amount of time. The firsts were well spread out in six races with six different people winning a race (Erich, Frank, , Len & Robert). The wind was very shifty which caused many lead changes. Results are posted here.
I have been excited by all the new faces this year and the turnouts thus far. I hope that we can keep it up in 2012.
The next Sunday is the Hangover Regatta January 1. Happy Holidays and Happy New Year and hope to see you on the water on the 1st.