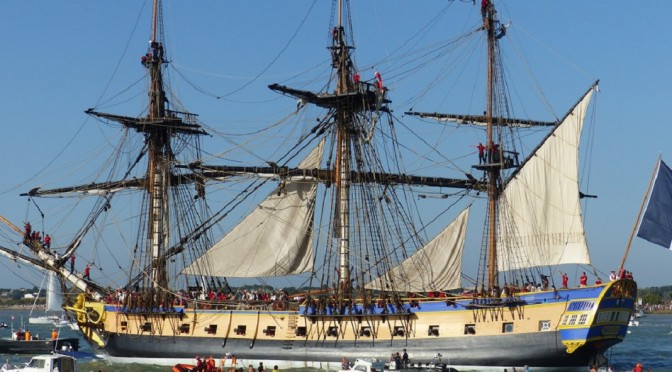 If you are interested in seeing an authentic replica of an 18th century tall ship the French frigate Hermione will be in Alexandra Virginia at the Alexandria Marina behind the Torpedo Factory from Wednesday June 10 – Friday June 12, 2015. She will also be in Annapolis, MD, from Tuesday June 16 – Wednesday June 17, 2015 before making her way further up the eastern seaboard.

The vessel on displa is a reconstructed replica of the 18th century French frigate Hermione (Air-mee-on).  The original Hermione brought Gilbert du Motier the Marquis de Lafayette to George Washington with news of French military aid in 1780 during the American Revolutionary War. It was a Concorde class 32 gun frigate that participated in the naval blockade of the British contributing to the defeat of General Cornwallis by Washington and Rochambeau in the siege of Yorktown, Virginia.

The British captured the Hermione’s sister ship, La Concorde in 1783.  Before putting it into their service they made a study of the La Concorde including making drawings and plans. These plans were preserved and formed the basis for the Hermione replica. Construction on the replica ship began in 1997.  The ship has sailed from France and is expected in Yorktown, VA on Friday June 5.

Tickets are no longer available to reserve in advance for the tour in Alexandria but some tickets will be available to the public at 8:30 AM and 12 noon each day. Other events will be occurring pier-side 9 AM to 7 PM Wednesday through Friday.