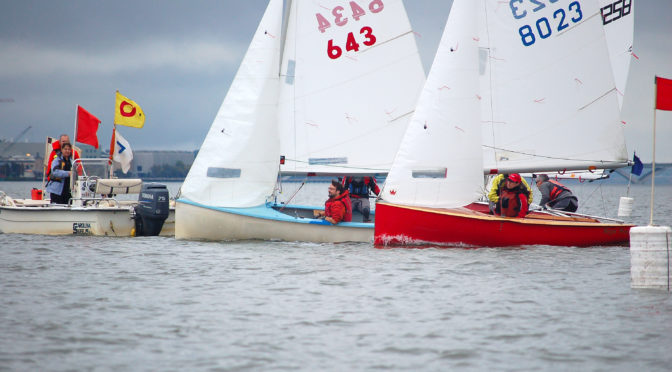 This past Sunday felt more like a professional training venue than a local club’s series. After a beautiful sunny and moderately breezy Saturday, I suspect Sunday’s forecast of rain and either too little or too much wind kept many sailors away. In reality, we experienced little to no rain while racing, enough wind for three competitive races, and began to receive the predicted gusts for the sail home.

The three lone participants (Farley, Barney, and myself) received unwavering attention from our two support boats. An active RC squared the course, captured action shots, and even fed us beer bread! I can’t thank RC enough for holding a great day of racing.  Competitors saw both triangle and olympic courses, which offered a welcome relief from a constant dead downwind wing-on-wing leeward leg.

With just three boats, I focused on being on the line (or as near to it as I often dare – still working on that) and optimizing boat speed, while Marisa performed excellent compass work. We seemed to have just as good or better boatspeed and so I really worked at pointing higher than surrounding boats until I felt us start to slow down. Several of our passing maneuvers resulted from pure boat speed, while others from sailing in the lifts. All in all, it was a joy to be in our new boat Mega Woof and race against some stiff competition.