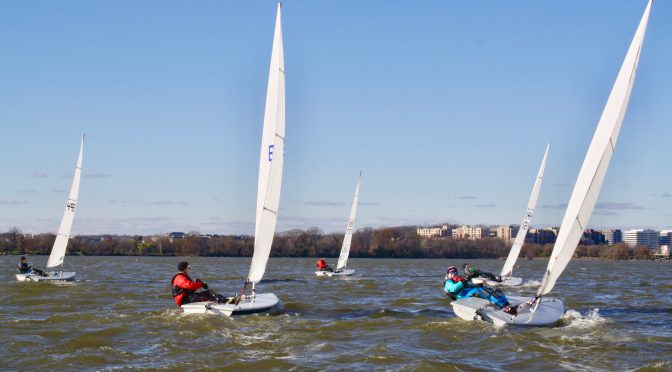 The sailing was very good with plenty of sunshine and strong wind. There was a bit of debate if it was truly heavy wind, but it was at least border line. We had two on RC and I’m glad we did as I wouldn’t want to have just one on a windy day like today. As the temps get colder I’m thinking that two on RC should be the rule rather than the exception. Thank you John and Kaitlyn for coming out and getting 6 races in!
We had 11 boats come out and start but with the winds getting strong in the gusts many people reasonably let up on racing. The winds were from the west so we were the short way across the river. The wind had strong gusts at 15-20 with lulls that were in the 8-10 range, with plenty of shiftiness. I typically do better in the 15-20 range so the lulls were somewhat troublesome for me.
Starts
The start line was less crowded than in weeks past so I used my typical “drift” start. I’ll drift near-ish to the committee boat until 40-30 second to go, then pick up some speed before the start and go. There has to be enough wind that sailing around boats is no issue, and there is plenty of line room for acceleration. Vang halfway on so I can have some maneuverability before the start. Once I start I two-block the main, take off, and snug the vang.
Upwind
I tend to have good speed upwind when the wind is up, and in a couple of races I used this to my advantage. The wind was shifty and I’ve been struggling to determine which is the favored tack. Sometimes speed upwind is good enough, but not today as I often went the wrong way and got punished. I also had trouble powering back up for the lulls, another thing I need to work on. Sails in hard to stay flat in the gusts turn into underpowered when the lulls strike.
Downwind
I had an okay time downwind, I tried to steer for the current that came in later in the day. I also managed to stay upright downwind. My only wind came in a race where 2 boats in front of me capsized or nearly capsized. I did have a bit of trouble heading down at the windward mark. Easing the vang is key, as is getting the sail out and the boat pointed the right direction.
It was again good to be out sailing and to see everyone. I’m already looking forward to next week!