It’s memorial day weekend.   And it only 50 degrees and raining.  No fair.

The NE winds weren’t that bad, though there were some big shift and occasionally the winds would pick up.  On the RC boat we could feel waves of warmer and calmer winds coming through.  Also, the winds were stronger than predicted by the NWS. 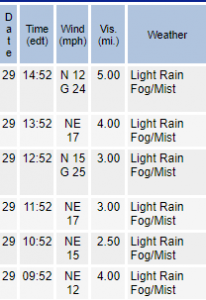 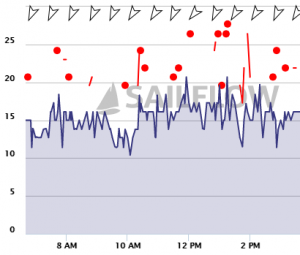 7 of 34 registered boats went out to race: Two each of Albacores, Buccs, and Lasers, and a sole Lightning.

We setup the course with the leeward mark near the powerplant the windward mark pretty far up river next to the channel.  We had 8 to 10 feet of water and no debris.   All classes started together on a single line.

“The picnic occurred. Lee cooked bbq. MoMo brought beans. We hung out till after 1700. it was cold and rainy.” – Barney

Day 2 should be friendlier.

Thanks to my RC team of Jeff Witten, Ed Ryan, Bob Astrove, and Peter Pietra.  We had to deal with motor problems (fuel line became detached and then took on air and moisture).  Bob brought water proof paper that was really useful for recording the finishes.