The day started off with no wind, but at 1100 it started to build and built quickly.  By the time of the first start at 1130, it was in the upper teens and gusting into the upper 20s.

Jim and Susan Graham were on the signal boat and Dan Miller and Kailyn Lucey were on the mark boat.   They gave us one T-2 race and we all decided that was enough and sailed home.

Only four boat made it to the start area.  I was on a Lightning and we had the vang, cunningham, and backstay on very hard to flatten the sails and the traveller down (like easing he main without letting the boom rise).  The jib lead was back to open up the top of the sail and keep the bottom flat.   And we still had to ease both sails to keep the boat flat.

On the reaches when a puff hit, we’d plane and the bow sprayed water like we were on a Laser and Farley on an Albacore did the same but more often.   Our GPS’s recorded a top speed of 12.6 mph.   Exciting.

Afterwards, we had a nice cookout.  Aaron Boesenecker had the grill fired up and Melissa Morgan/Phillippe brought down delicious marinated chicken, homemade humus, and leftover goodies from her birthday party. 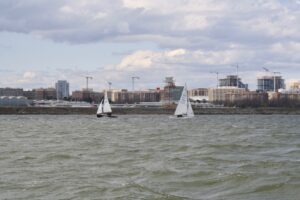 Changes for the Spring Series:

We are using RRS Appendix U  or the 3-minute sound-based starting system.   Flags are optional, but I’m guessing RC will put up class flags so people know which fleets are starting and maybe postponement, OCS ,and General Recall flags if necessary.

So you don’t need to set your watch but don’t stray too far from the starting area.