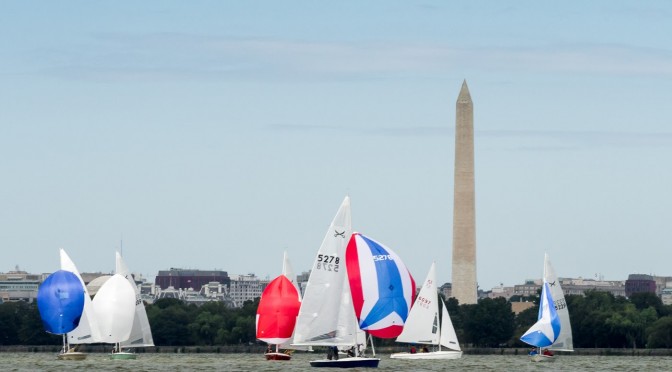 The regatta started slowly with no wind on Saturday morning.   The PRO wisely 🙂 made the decision to postpone ashore so that the sailors did not have to bob around in the sun.   We were teased with a bit of wind right along the marina shoreline but it was glassy further out on the river.  As the hours passed nothing came in.   A couple of sailors ventured out onto the river and made great headway with the current but struggled to get back against it.

The cove had a bit of breeze and so the lower course PRO, Geof Fuller, gave the Penguins (3) and Lasers (2)  5 races.

Any attempt at upper course racing was abandoned at 1:30.  Many of the sailors were drinking beer by that time anyway.

The Lebanese Tavern brought the food just before 5.  Great stuff.  The rain came but two pop up tents protected most of the sailors as they munched and drank.

It began as a cool cloudy day with a 7-8 mph east breeze.  The current was an hour into its ebb cycle as the races began.   The PRO (me, Nabeel) set up  O-2 courses:  triangle, windward-leeward, finish upwind.  With five classes in four starts, it was busy.  After the Flying Scots started race 3 and the Multi-Hulls/Lightnings started race 4,  some rain came and killed most of the wind.  After rounding the windward mark, those sailors did everything they could to keep from being swept down river by the strengthening ebb current.   The RC shortened course at the leeward mark and everybody rode the current back to the marina.

Congratulations to Lisa-Marie Lane in the Lightning class for winning her first regatta and getting her name engraved on the Katherine Hearst award for the woman beating the most boats in the regatta.

Congratulations to Marty Minot in the Albacores for winning that the largest class in the regatta.  It was also the Albacore Mid-Atlantic Championship and he also gets his named engraved on the Len E. Penso award for being the sailor over 50 to beat the most boats.

Thanks to the RC team for giving us races:

Thanks to the social team for the just as important food & drink:

Thanks to the protest committee for a quick and thoughtful resolution of one minor incident:

The supposedly two-day Mid-Atlantic Championship at PRSA ended instead as a day on the beach followed by a quick succession of fluky, but competitive, races on Sunday.

Saturday’s forecast was for a very light day on the Potomac and, unfortunately this proved to be the case. Even the weatherman’s (or phone app’s) promise of a few knots in the afternoon didn’t materialize until very late in the day, too late to organize anything in the way of racing. With not enough breeze to even fight the current, no wind meant no racing for the first day.

An improved forecast for Sunday promised a second day. The morning started out very light but improved to a light breeze out of the ESE. With the air moving, the fleet and the Race Committee headed out at the appointed time, hoping to make up for our lackluster Saturday.

During the first race, the breeze that had been merely present came in stronger and was enough to have both skipper and crew sitting on the rail. Though the tide had been more or less slack when we launched, by the first gun the current was already ebbing briskly as we worked our way upwind. Relatively constant in direction, the breeze seemed fairly even across the course, with no one side highly favored. Watching the Buccaneers beat to the windward mark, it seemed that some of the boats on the right side of the course had a slight advantage, and this proved to be true for our race as well. The breeze held for the entire race, a relatively short Olympic course, and the fleet was close and competitive throughout.

By the second race, the breeze had fallen away somewhat and became a little streaky, with unpredictable puffs scattered over the course. Boats separated by just a few boat lengths would get different breezes—a fact that was especially frustrating to us as we watched Khin Thein cruise on a puff from the final leeward mark to snatch away the lead. If the decreased volume and increased flukiness of the wind did not dampen spirits, the few sprinkles of rain that had started to fall were not especially welcome.

Race three was much lighter still, but there was just enough wind to fight against the current, although the jib never seemed to fill completely. The evaporation of the breeze was accompanied by an increase in the rain, at times fairly heavy. The harder rain further worsened the wind, which fell to nearly nothing. This near-complete disappearance of the wind coincided with the fleet’s rounding of the final leeward mark. Our boat, which had a less-than perfect start, had climbed up the fleet in the downwind leg and were behind the main pack when the wind gave up. With the current pushing us to port of the mark, we slowly made our way around, using what little wind and momentum we had to get to leeward and starboard of the mark, finally letting the current help us around. One final puff helped edge most of the fleet upwind to the finish but quickly this too went away. The other classes, having just started a race, were not so lucky and stalled halfway through their first reach leg, ultimately finishing at the leeward mark. After waiting to see if the wind which had been so promising in the morning would return and seeing no signs, the race committee dismissed the fleet, most of which had been taken down the river by the current anyway.

Overall, it was a fun, if shorter, regatta with tight, competitive sailing and some really good Lebanese food for dinner Saturday. The Race Committee ran an impressive operation, managing to get the different fleets started and racing as quickly as possible so that we were able to make the most of what the wind would give us.