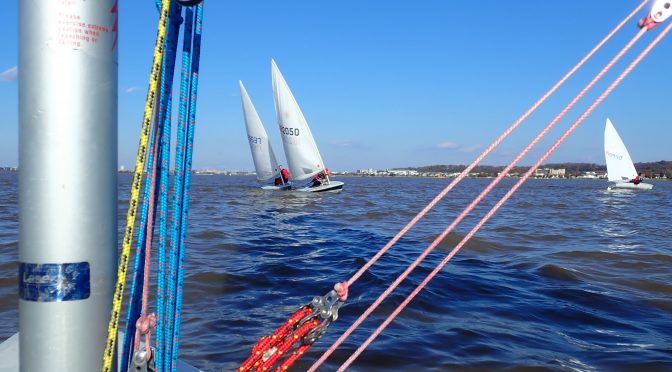 Another day of fantastic conditions for the 2018-2019 season – something we’ll find hard to recall in February.  Fleet captain and PRO Tom Hutton with Helper Jacob Donkersloot did a great job in setting a nicely-sized, well-positioned course and rolling through an interesting ‘variety pack’ of races – four Olympics, one triangle and a windward-leeward.
Light westerly winds were forecast, but the actual winds during racing were similar to the week before – steady 6-10 knots oscillating around due south, with some pronounced short puffs.  I think this had some thermal aspect as DC heated up in the afternoon sun, with a reversion to lighter westerlies as soon as the sun started to dip at the end of racing.
Plenty of current this time – full ebb tide during racing combined with post-rain flow of river.  This led to some tricky starts (including a few generals) and close-shave leeward mark roundings but fewer tactical angles than I expected – the overall flow seemed somewhat even across the whole course?  Still, the current put a strong imperative on clear air on the downwind leg – I think this accounted for the frequent bunching of a pack behind the leaders in clear air who seemed to consistently break out on either side.
Like last weekend, neither side seemed consistently favored upwind.  I usually started at the pin for clear air and tactical room for error re the current.  I also originally thought the DC side would have deeper water and so stronger favorable current – but didn’t seem to play out that way.  Starting mid-line and up the middle probably would have paid more consistently – but you need to reliably achieve a good start and I’m not there yet.
Light-air reaches are unusual in weekend racing – but they turned out to be very interesting.  As always, it’s hard to make dramatic gains in the ‘parade’ but incremental advance & hold was possible.  I found it wasn’t always worth trying to get the inside at the reach mark – a few times going on the outside of the pack and staying low and by-the-lee seemed to pay.  Perhaps the current helped in that case?  Anyway, I’m going to put more thought into reaches in future – some subtle stuff going on there.
For most of the races, the downwind leg was after boats had separated on previous legs – but I noticed there was a lot of bunching, I’m guessing from the interaction of wind shadows and adverse current.  Like last weekend, I found going for clear air right after the windward mark was key, followed by always playing one side or other, by-the-lee or slightly hotter (never DDW).  The little wavelets that arose from wind vs. current could occasionally add a vague simulacrum of surfing if you could catch ‘em.  Perhaps not actually effective for racing but fun-ish – yeah, I’m easily amused.
2018-2019-Laser-Frostbite-Series-2