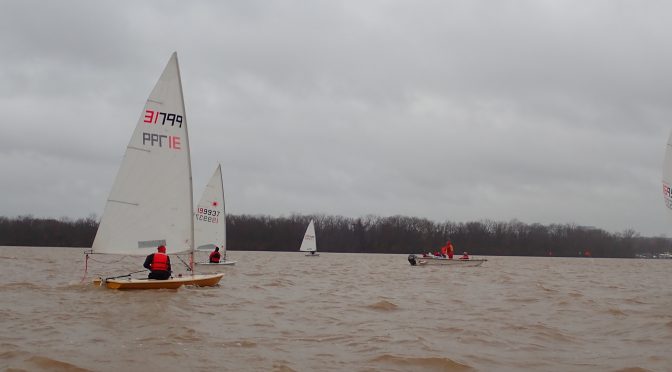 Dear all,
This is my fourth season doing the frostbite series, but my first 3rd place write-up. It goes to show that it is indeed possible to gradually improve over time!
Sunday was one of those day where it was  miserable on land, but turned out to be perfectly OK once we got on the water. Huge thanks goes to the RC team (Keith, Jim, and Jeff) for simply getting on with making the RC boat ready, and thereby  nudging the rest of us into drysuits (before rigging!), and then subsequently running 6 windward-leeward races on a well laid-out course. The wind was around 12 knots coming out of the North; it swung slightly towards west as the afternoon progressed.  The tide was very strong and running out throughout racing.
I think there were two key things for me today.
First (as always..) the start is key, and I focus a lot to be on the line at start. I try always to check to see what end is advantageous (today it was mostly the pin-end, I thought), but my main priority is to hit the line on time. As it happened, in several races today I managed both to be on time and in the right end (it will probably be a while before that happens again). The pin-end also had the advantage (I think) that it put you on the left side of the course where I thought the tide was slightly lighter.  One more thing that I try to do is to force myself to ONLY focus on sailing fast for the first 2 minutes after start (at least when I am on starboard and am in a free lane)—I tend to lose a lot if I look after other boats immediately after the start.
Second, I try not to make too many mistakes. I find it often better to be quite conservative, especially when the wind is up. For example, today I was generally very careful to have ample room at the windward mark—when the tide is as strong as today, it’s a killer to try to pinch around the mark.  Similarly at the leeward mark I didn’t mind too much giving up the inside lane in favor of having more room to make a good jibe and hit the upward leg at a good angle. Overall, I made only one serious mistake today (when I—against my better judgment— picked a fight with Len at the windward mark and ended up hitting it..).
Last, let me just say that I really appreciate all the advice that many of the more experienced members of the fleet so generously share. There are a 1,000 things to learn, and it is really helpful to get some tips!
Claus
2018-2019-Laser-Frostbite-Series-5