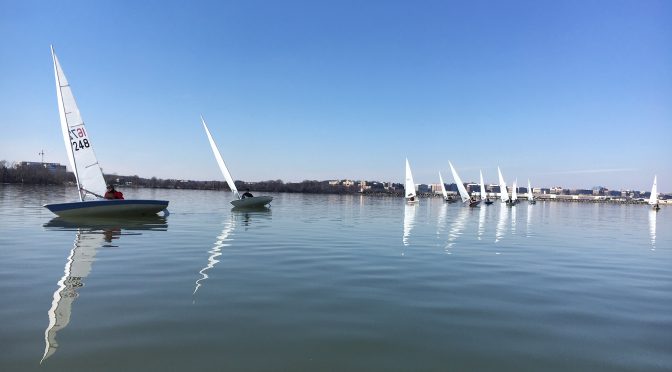 This week Tom got 3rd place.  But since he volunteered to head in early and get the 19 to tow in the 17 (due to engine issues), I decided that I would do a 1st place write up to mix it up.

First off thanks to Bob and Mike for doing RC this past weekend.  We almost had to cancel due to not having RC!  Also thanks to Laura for helping reset marks between races.  And a bigger thanks to Jim Graham for moving the pin between races.  That is a beast of a mark to pull out and sail around with.  In total, we reset the course 3 times I think.
The Lighter Races
The day started out with some tough and frustrating light wind.  The first race was a mostly north west breeze when it was there.  The second race was very similar but with the wind mostly out of the east.  And even the third race where it looked like the breeze would end up picking up still was light but out of the south more.  The keys for me in these three races were being patient and still and not making any brash decisions.  Additionally in the light air, I was sitting pretty far forward in the boat, more or less on top of the dagger board.  This was both upwind and downwind.  The downwinds were not quite true down winds where you might try sailing be the lee.  While sailing both up and downwind, I kept a bit of leeward heel on the boat to try and keep the sail more full looking.  Other than that, it was the typical stuff.  Start on the line with some speed, look for the breeze, and stay patient.
The “Windy” Races
After the 3rd race, the wind finally filled in out of the south and we were able to get in two short races with some breeze.  These mostly continued to follow the same rules as the previous races but I kept my body in the more normal positioning on the Laser and keeping the boat flatter.  Clean starts and clear air downwind are what I found helping the most to keep the speed up.
Look forward to seeing everyone out on the water again next weekend.
Farley
2020-2021 Laser Frostbit Series #13