The winds direction was fairly stable from the SW and the strength in the 10 to 20 range. 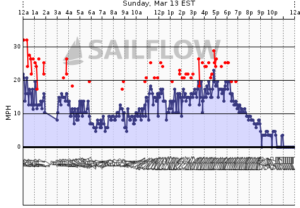 From the marina, the water appeared to be very very low because  for the previous 24 hours gale force winds were blowing from the northwest AND it was low tide around noon.  Georgetown was hosting a regatta and decided to stay in the cove and run it there. However, once the sailors left the marina it did not appear to be an issue.

Eight sailors went out and had a challenging time.

Yeah, fair bit of capsizing. The attrition we had during the day was typically after capsizes.  Jim (Graham) had two before he quit.  It was already hard work sailing in those conditions, and capsizes really wear you out – we didn’t count how many there were. Tom went to Jim during his second capsize – good to see sailors looking out for each other.
We also had a couple of equipment failures – Tom’s tiller extension broke, and Brian’s mainsheet broke.
— Steen