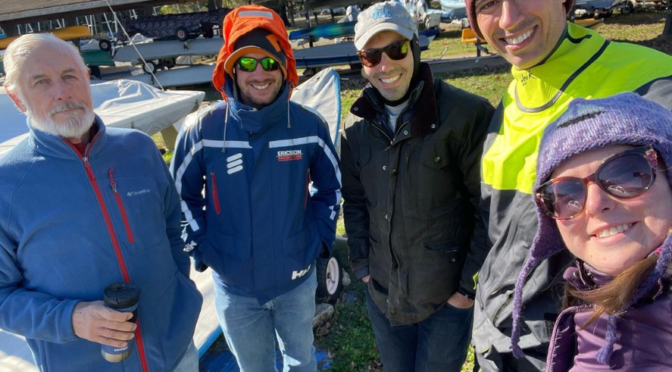 Well Sailors, after 3 weekends in a row of cancelling, we hope to finally get out and race this coming weekend.

Frostbite Series 1 (Nov 13) was too windy.  Two souls made it to the race course with several capsizing on the way and others waiting on shore.

Frostbite Series 2 (Nov 20) was also windy.  And the high of 38 gave us January Frostbiting weather in November.  And with a lot of wind for the weekend and low tide, there was not much water in the river. Three brave souls showed up to try and race but ultimately pulled the plug.

Frostbite Series 3 (Nov 27) was rainy and a strange forecast of 9 gusting to 33 with a small craft advisory.  6 sailors showed up but only two were gung ho to go out and ultimately we decided that it was not worth punishing the race committee for two of us to go sailing.

Next weekend is a new day and hopefully we will get out and finally do a few races!