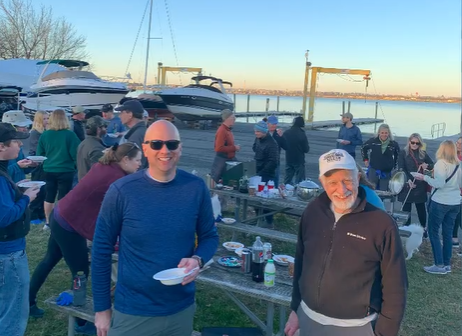 Sunday was a refreshing day after such a chilly Christmas weekend The sun was shining, the temperatures were hovering on either side of 60 degrees, and the A-team was running races. The only problem was the wind never freshened beyond 4 or 5 mph.Nonetheless, we had four fun races.

Thinking about the race course a couple of variables came to mind. First, the wind was oscillating about 15 degrees either side of 180( 30 degrees total).Second, the flood was hard, so that meant that the middle and right had far less current.Third, the course seemed port biased. Finally, the line varied between pin favored to extremely pin favored. When weighing these variables I felt that a pin vicinity start( not necessarily winning the pin) was critical. Every race there seemed to be a left hand shift reasonably soon after the start. This allowed a quick tack to port with an easy long tack to the top of the course. I pretty much dismissed the stronger current given the combination of pin end bias and weather mark bias. Downwind, I felt that looking for wind lines was paramount. For the most part I stayed to the right( looking downwind) of the rhumbline given the current as long as wind was present. I made my mark-room moves only at the bottom of the course. The second weather leg offered a bit more to think about. In race one for instance there was an extreme left hand phase until we passed the airport landing pier. At that point Alex and I traded tacks along the jet blasts all the way to the weather mark. In races two through four the breeze seemed best in the middle of the course on that leg.On those legs I just attempted to stay in phase with the shift pattern noted above.
Boat speed, boat handling, set up, etc: There are countless pieces written on this website, SSA Fleet 10s’ Cedar Point’s, Newport’s and many others, some even written by me. Therefore I won’t bore you with detail. Here are some observations of some mistakes I saw: 1.Boats were too heeled. Heeling the boat creates rudder drag.  2. If your vang was loose upwind you were slow. The draft needs to be between 1/3-1/2 way back. The vang achieves this. 3. If you trimmed your cunningham one time Sunday, you lost boats. The leech is too loose and the sail entry too fine with a tight cunningham in a drifter. 4. Outhauls were almost all too tight.
In sum, I thought the key on Sunday was to prioritize the variables based upon each one’s risk and reward and to make sure that the boat had as much power as possible to keep moving in the light conditions. We all owe huge thanks to Len, Barbara, Tom, and Kevin, the RC team, who sacrificed their sailing day to make the racing possible. I also want to thank Alex and Jake for driving from NYCC to spice things up, and for Mike for coming from SSA.
Happy New Year!
James Jacob
Additionally: Thanks to everyone that brought delicious food to potluck.  Particularly the sailor’s wives that cooked while we were out sailing!
2023 Hangover Regatta Results