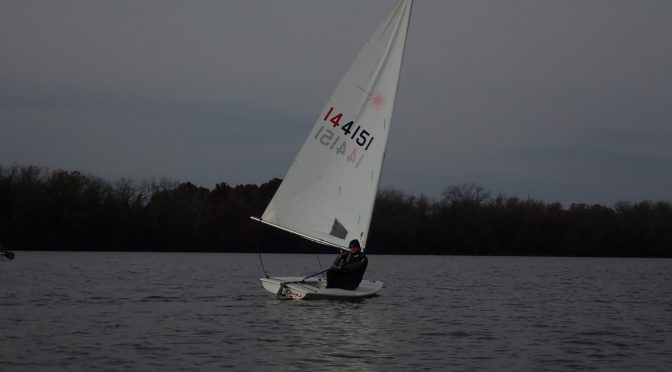 Very pleasant conditions for 2018-2019 season kick-off.  Many thanks to PRO Todd Blekicki and Helper Tyler Phillips for setting a well-positioned course and efficiently rolling through 5 races.
As more-or-less promised in the forecast, winds were steady 5-9 knots velocity with direction oscillating tightly around due south.  Tide was incoming, but I didn’t see much current effect during racing – maybe post-rain/snow flow of the river cancelled that out?  Also, the course was generally between the two channels so that helped.
With a square well-sized line, steady breeze and no big current effect, neither side seemed especially favored on the upwind leg.  The slight oscillations in direction and pressure cycled fast enough to cancel out.  All of which led to close bunching at the first upwind mark and a lot of, ah, ‘intricate’ boat maneuvering.  Good way to knock off some rules and boat handling rust, no?
In these conditions for upwind, a mid-line start is ideal but clear air is absolutely critical.  If you’re not a great starter (e.g. me), the pin seemed to work out as a way to stay clear and focus on boat speed.  But the risk there is coming back in and having to face an ugly wall of starboard tackers.  So I decided in the last race to ‘practice’ a mid-line start and – predictably – it was less than ideal.  Useful lesson for this frequent occurrence is to bite the bullet and get to clear air as quickly as possible.
Downwind for all the races seemed to offer some subtle tactical gains.  You could play the slight oscillations and stay out of the wind shadows by alternating between by-the-lee on the VA side and a little hotter to the MD side depending on the puff-of-the-moment.  That worked out well for me in the first four races but in the last I took it too far to the MD side when I saw the VA side looked crushed (momentarily as it turned out) and lost several spots.  Know when to fold em’, eh?
2018-2019-Laser-Frostbite-Series-1