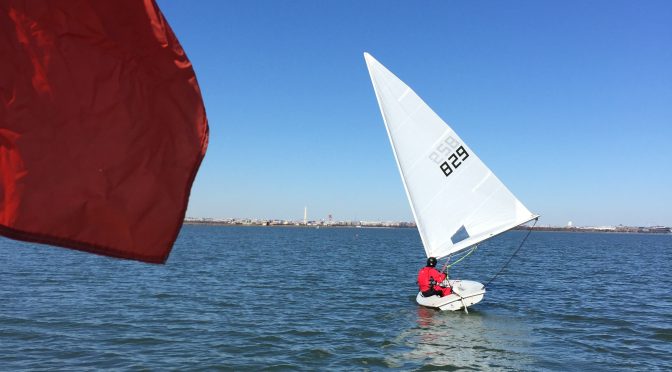 First, It was a beautiful day for a sail with light winds that didn’t quit and didn’t vary much.  The current/tide was a factor, both on the start line (I got caught over once) and at the windward mark.  I found going right and setting up well out worked for me, as the current would drift me to the layline by the time I reached the mark. I found going downwind (upcurrent) to be slow, requiring sitting very still with sail by the lee, but I feel the total weight of the boat and skipper was a factor   (Jim Klein was uncatchable)  Twice I picked a little debris off my rudder which could have slowed me a bit. This is my first time to do a third place write-up, due in part to the fact that the race committee (Farley and Tom) almost always take places above third.  Thanks for doing Race Committee!  Welcome back to Dan Miller who had yet sailed this season, but showed no rust as he led the first race until the last few boatlengths, being nosed out by Jim Klein.
Not much else to say except that today’s sailing is one of the most pleasant “frostbite” events I had in 20 years of frostbiting!!
2019-2020 Laser Frostbite Series #13