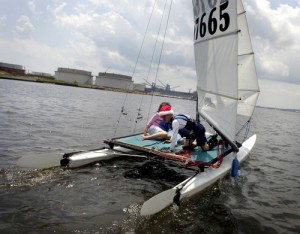 The idea for the event grew out of a dare.

Three years ago, Keith Strasser of Frederick challenged SCA’s treasurer August “Bud” Boblitz to ride a catamaran. The Pasadena resident agreed to do it, but only if his friends and family pledged $1,000 toward Santa Claus Anonymous.

This was no simple feat. Boblitz doesn’t swim, and catamarans can reach a top speed of one-and-a-half times the wind speed – 8 knots Saturday, or roughly 10 mph, Strasser said. (The Inner Harbor speed limit is 6 knots, he added.)

As Strasser explained, sailing a catamaran is “the scariest roller coaster ride you’ve ever been on, with no seats, no seat belts and no cup holders.”

But Boblitz persevered, and the annual fundraising tradition developed. “It’s not for us,” he said. “It’s for the children.”

The story published in the Baltimore Sun is here:

You can also see a TV clip here on the event:
ABC Channel 2 video clip
http://www.abc2news.com/content/gmm/story/Santa-is-Back-in-Town/Rxqw2Kvze0-N0c7x2VDyjw.cspx