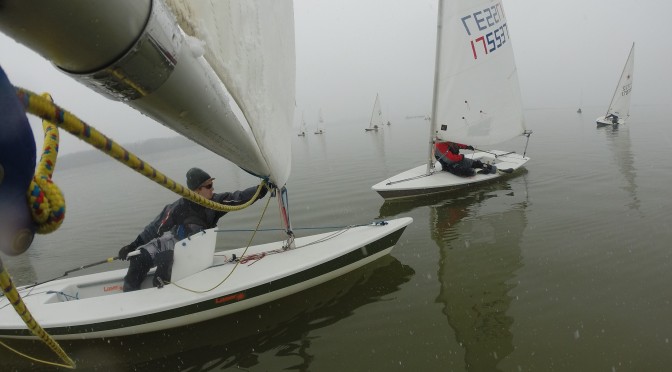 The wind for our Sunday, January 17 frostbite racing was just enough to overcome the current – which wasn’t running all that much. Frank and Bill ran two WL races and then mercifully released us to walk our boats back to the dock. I was a shame the wind didn’t cooperate since we had 23 boats drifting around.

As with any light air race, having clear air and getting off the line in the first row were critical. Once out on the course it was important to account for the current when determining the laylines. Since the wind zephyrs were coming from assorted directions it was best to stay near the middle of the course. I overcame a significantly poor start in the 1st race just by drifting up the middle.

The rule of thumb I follow is to flatten the sail in very light winds, similar to heavy winds. I had my outhaul on pretty tight, a little vang on, and the boat heeled to leeward to help get some shape in the sail. When going to weather the boom was just outboard of the transom and my body weight forward. Staying very attentive to the sail and adjusting course to meet the zephyrs and apparent wind changes was a full time job.

The inconsistent wind caused the second race to be a reach back and forth. With the current running at right angle to the course you had to decide how much above (up wind, up current) the mark you wanted to sail to get the best VMG and/or not have to tack and sail up current to make it around the mark. It is difficult to decide just how far above the mark to sail in this situation, but recognizing you have a problem is the first step.

A few weeks ago Jacob’s write-up was a sincere note of encouragement to the sailors who are just launching their frostbite programs. I would like to echo his message and thank everyone for contributing to the pleasant atmosphere we enjoy. Our fleet is now as vibrant as it has ever been in the decade I’ve been sailing at PRSA.