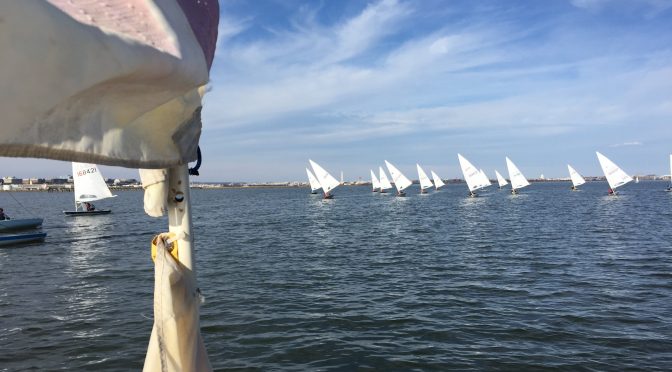 I was afraid going into the last race yesterday that this might be my fate.

Well actually I was pretty pleased.

Arriving at the dock at 11, it looked the westerly breeze had nearly died. As we got out to the race course, the northerly shift arrived and started filling in. In the first 2 1/2 races, the right side was strongly favored. In the first three races I got out to the right early, and was at or near the front at the first mark each race.  The wind started shifting left in the middle of the third race and several boats who took the chance did well.

The wind shifted fairly strongly to the left at the end of the race, leaving the starting pin strongly favored. So I worked hard to get port tack starts for the last three races. In races 4 and 6 I missed the front hole, and had to cross some sterns. I was actually over early in race 4, and went around the pin, but was able to find a nice lane and clear air. In race 5, I was right on the line, and only “let” Tom pass me at the last leward mark. I still haven’t figured out how to do everything one needs to do down there.

Best thing on the day for me was being able to see where the wind was and get there.  Worst thing is still that leward mark rounding.

Thanks to Farley for doing RC solo.