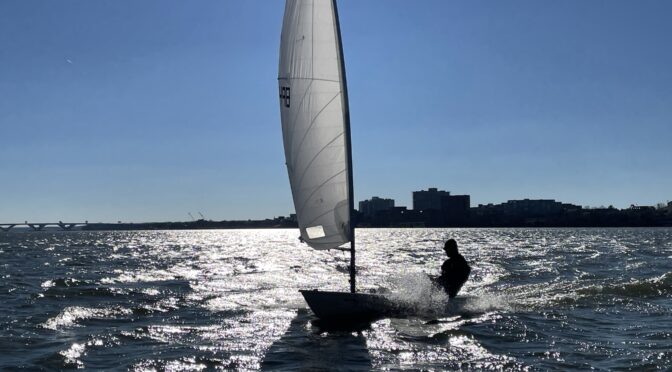 You should have been there. It was a beautiful winter day for frostbite sailing.  The temperature was in the low 40s. The sun was out. According to sailflow the winds were in the 15 to 20 range with higher gusts but it did not feel that high to me.  There were waves that were not aligned with the wind when we first went out but they flattened out.

My goal was to sail conservatively and stay upright.  I succeeded!  One time I “tea-bagged” but I I kept my cool and my feet in the hiking straps trimmed in and bore off some and the wind pulled me back up.   I did lose a boat but it could have been worse!

Jim Klein and Michael Liss ran the races for us and they set an olympic for the first race and two-triangles for the next four probably because they wanted to keep us from sailing dead downwind, rocking and rolling (and capsizing).

The course was skewed left, so that starboard was the long tack upwind.  I started every race at the boat end with speed and was able to use starboard rights to keep people to leeward of me from crossing me.  My vang was pulled to the block-to-block mark and I kept the mainsheet eased a bit so that I could sail relaxed, flat, and fast.   This worked as I was first to the windward mark four of five times.  Plus, I noticed a left shift as I got closer to the Virginia side which was perfect for tacking and getting up to the layline.

Downwind, I was conservative.  At the windward mark, I was careful to bear off and gain speed before bearing off more.  I did not completely ease the vang.  I did not bother easing the outhaul or raising the board.  I wanted to feel and respond to the gusts instead of messing around fine tuning.  At the gybe mark I experimented staying on port and extremely by the lee.  It felt fine and stable but probably a bit slow.

The weakest part of my sailing was rounding the leeward mark.  With the extra pressure from the wind, I pulled in the mainsheet with my left hand only instead of using both my left and right arms, so it took what seemed like an eternity to get up to close hauled.  Something to work on.