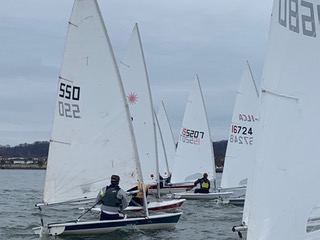 It was another light and variable day on the Potomac, but with enough wind to get in 6 races I have no complaints. Wind was 2-6 out of the south, then southeast, with strong current flowing out at the start of racing, then trailing off. I tried to start towards the pin end of the line (and on time, a personal challenge) I think most of the earlier starts in particular had a pin favor, and going left tended to pay off as the wind shifted to the east throughout the day. It was a challenging day as no one could quite predict where the next puff would be on the course which definitely helped me claw back to the pack after some less than ideal starts. The puffs were shifty as well; staying laser focused on my telltales on the upwind really helped.
The course had a leeward gate which made things interesting, but is always a challenge to keep straight. The [course starboard] side mark was favored for most of the early races and I definitely lost boats by trying to avoid the mess over there and going to the clean, but further gate. I’ve been using far more vang than I used to in light air and it seems to be helping. I also played with my outhaul in the puffs and lulls on the upwind (it was so light I often had time to fiddle), letting it off downwind. Kudos to Dave and Morgan on the race committee for keeping things straight as they could and banging out 6 races in some tricky conditions.
Ethan
2022 Frostbite Series #9
2022 Frostbite Series Totals as of 1/22/23
2022 Frostbite Series all races as of 1/22/23