Fourteen people showed up to take part in a 40 degree day on the last Sunday of January. The wind was from the east-northeast starting out light to variable in the last race. Erich Hesse and Ridley Nelson set up a windward-leeward course in the cove with the starting line within a stone’s throw of the Mount Vernon bike path. The winner of the day was Nabeel Alsalam and his winner’s write-up below. We had one new boat owner join us for the first time, Justin Pollack, who bought a boat that has been sitting at the marina. Justin had a good day after a long hiatus from Laser sailing and finished 2nd overall. We also had a friend of Alex Jacob, Shawn Golden, join us and they both showed the older/heavier people how to do it in the light air.

Here is a cool shot by Erich of Nabeel ghosting toward the finish. (Click to enlarge) 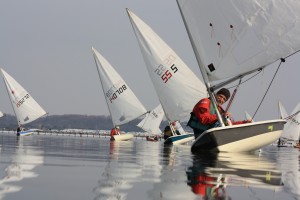 I’m a heavy weight so I’m amazed I was able to win on such a light air day.   Hold out hope fellow heavy weights!

I started all the races today at the pin end.   I came in on port and tacked underneath with just enough time to head for the pin and build speed, usually with about 30 seconds to go.  Today people were piling up at the boat end, a couple of times because Cary wanted a boat end start and effectively took people up or created a traffic jam down there. So I did not have too much trouble winning the pin.

Upwind, my goal was to get further out into the cove where I thought the wind might be better.   So after the start I just kept going until I got close to the port layline, even if I had to follow someone’s transom.   There were some tempting catpaws off to the right, but they never seemed to get to us, so I resisted tacking for them.  Plus, it is too costly for a heavy like me to take tacks.   I tried to focus on how fast the boat was moving through the water and pinch up as much as I could without losing speed.  I noticed that even with a soft luff I was able to keep speed.

Downwind, I typically get passed by several boats and have a hard time figuring out what to do.  Same thing happened early on today.  For example, in the second race, Cary passed me heading downwind for the finish.  We were both on port gybe.   I could not understand his greater speed, but he graciously pointed out to me (after the finish, of course) that my main was too far out as the course was tilted left and the wind was coming from the right, not dead downwind.  He was absolutely right.  In general, I was determined to keep clear air which I think is doubly important for a heavyweight like myself, so I roll gybed around the windward mark to get off to the right side of the course (looking upwind).  Due to my difficulty going fast on port, I typically gybed back to starboard after clearing the upwind boats in order to sail by the lee. That seemed to work so that by the last two races, I didn’t even gybe but just bore off very deep and by the lee.

The leeward mark was a gate through the start line and out the ends.  In hindsight, I am pretty sure the pin end was favored and so the boats sailing down the left side actually got a boat length or so of advantage.  But even if I had known that at the time, I think I would still have gone for the comfort of clear air on the right side even if I had to sail a little further to get around the boat end.

In the first race, I was coming in from the port side and was not sure I could cross Keith who was coming in slightly below the starboard layline.   I hailed “tack or cross” hoping he would say “cross”.   But he was not familiar with that custom and said something else that I did not understand.   In any case, I tried to cross and did not make it forcing Keith to tack to keep from hitting me.  To be clear, Keith was under no obligation to say either tack or cross — its just a custom in some fleets — so I had to do a penalty turn which I did after rounding the mark and went from 2nd to 6th.  Poor Keith probably went from 1st to 4th.   Sorry, Keith.

Here is one of the starts: