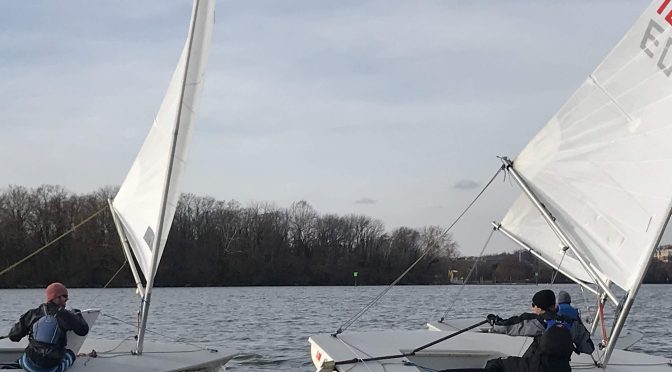 It was fantastic to enjoy some food and merriment with so many of our sailors at the 2019 PRSA Annual General Meeting and Awards Banquet.   Please find below links to the material presented during the meeting.  Congratulations to our perpetual awards winners (listed below) and to our new PRSA Executive Committee (listed below).  Many thanks to our outgoing officers for their hard work and for their service to PRSA.

Great weather two weeks in a row at the end of the fall series is virtually unheard of on the Potomac, but that is what we had for the final fall series race day of 2019!   PRO Frank Gallagher and his RC crew got us 3 nice races in a moderate southerly.  Temps in the mid-50s meant that it wasn’t too chilly to stick around for a post-race BBQ and beer.  What a great way to wrap up the season!

After two weeks of lousy weather we finally had a nice day for racing for PRSA Fall Series #7.  PRO Farley Will and his crew did a great job in taking full advantage of a nice southerly breeze.  After some great racing there was still enough daylight left for a fun BBQ.

We had a beautiful southerly breeze for Fall Series #4, allowing PRO Jim Antonivich and his crew to set a nice long course.  We enjoyed 2 “O3” races and an “O2” race before heading back to shore to relax and grill.

The light and variable easterly breeze that we had for Fall Series #3 certainly made for some challenging sailing, but PRO John VanVoorhis and his crew did a great job to get us as many races as we could before the breeze died and we headed back to shore for some beer and brats.

We had some fantastic photos taken by Lindsay Bach and by Tom Sliter at the 2019 PRSA President’s Cup / DC Sail Cantina Cup Regatta.  Here are the links (you can also find these and other photo links in the “Gallery” area of the PRSA website).  Enjoy!

Although the forecast looked grim and the conditions were light as we arrived at the marina PRO Mike Darrah and his crew took full advantage of the wind that we did have, getting us 3 fun races to start the fall series.