We had over 50 people attend the 2016 PRSA Annual General Meeting and Awards Ceremony, making it one of the best attended in recent years!  I want to extend a very special thank you to Melissa Morgan and Heather Howard for all of their work in planning the AGM, organizing the food and drink, decorating the room, and generally ensuring good cheer such that a great time was had by all.

The PRSA Executive Committee was pleased to highlight  our growth over the year, including a 5th consecutive year of membership growth and the highest total membership level (118 members) that we have seen since 2005!  We were also pleased to recognize Aaron Boesenecker, Frank Gallagher, and Will Phillippe  with PRSA perpetual awards awards.  You can keep reading for additional details and links to the relevant documents, including the AGM Agenda, the list of PRSA Spring and Fall Series winners, details on the perpetual award winners, and your 2017 PRSA Executive Committee.

At the AGM each officer from the PRSA Executive Committee provided an update on the state of the association.  The membership approved the creation of a committee to review the PRSA Constitution and bring a revised Constitution to the membership for approval at the 2017 AGM.  We also celebrated the PRSA Spring Series and Fall Series winners in each class and awarded the PRSA Perpetual Awards to members who have contributed outstanding Service over the year.  Finally, we approved a new PRSA Executive Committee  for 2016.

Finally a big thank you to our officers who served PRSA in 2016.  Here’s looking forward to an excellent 2017!

It was a pleasantly warm day on the Potomac with a good bit of breeze.  SailFlow shows winds in the high teens for most of our racing period with a few gusts in the high 20s.  It turned out 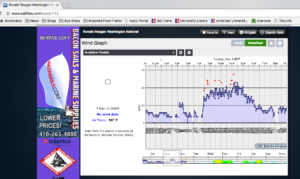 to be very nice  with some good wind for planing and surfing.  3 races were held and the RC also organized a fun race back to the dock for beer!